The RIN Mutineer Who Became An Admiral in Pakistan Navy

One doesn't know if the newly appointed Pakistan Army, Chief General Raheel Sharif is  anyway related to the former Pakistan Naval Chief Admiral Mohammed Shariff. However, if the two are connected, it may give India an opportunity to communicate better with the General, because Admiral (Retd) Mohammed Sharif has deep rooted connections with India's freedom struggle and wars. 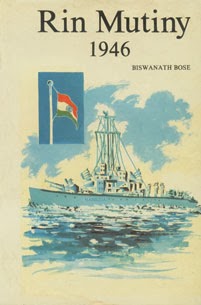 Loyalty is a service norm and mutiny an aberration. Mutinies on the high seas confined to a vessel or fleet, either have loyalists or mutineers. However, this may not hold true in case of mutinies that happen on shore establishments in a colonial settings - such naval mutinies may even throw up sailors who are both loyal as well as mutineers- the loyal mutineers.

The Royal Indian Naval Mutiny (RIN) that started on 18 February 1946, in a shore establishment at Bombay, gives us ample example of such loyal mutineers, who were part of the Naval Strike Committee (NSC) that supposedly spearheaded the protests.

Archival facts reveal that the ‘Strike Committee’ composed Leading Telegraphist, M.S. Khan, Petty Officer, Madan Singh, Gomez and a few others were not the principal protagonists or the ring leaders of the mutiny. During the mutiny, they were seen to be moving across ships and establishments, in official vehicles, to speak to ratings at the behest of British naval authorities.

In fact, the Strike Committee had been formed at the insistence of Flag Officer Bombay on the 19th February 1946, after the commencement of mutiny. According to Lt. Mahindra Pal Singh’s testimony to the Commission of Enquiry, “Loyal ratings who were used by the authorities to their entire satisfaction to suppress the strike and maintain discipline when officers deserted their posts, were in the end called the “ring leader.”

The strike committee worked under the strict control of the British officers. Even when they met Sardar Patel on 23rd February 1946 at Bombay, they were accompanied by a pure loyalist officer of RIN, Lt. (later Admiral) S. M. Nanda.

While many innocent sailors, the genuine mutineers - driven by a feeling of nationalism - were unceremoniously discharged with disgrace from service, the loyal-mutineers in the ‘Strike Committee’ got adequately rewarded after completion of the motions of mutiny that triggered the British to kill 600 civilians on the streets of Bombay. One such loyal-mutineer was Leading Telegraphist MS Khan, the President of the NSC, who went on to build his career in the navy.

Post partition, the newly formed Pakistan Navy absorbed the 27-year-old, Mohammed Shariff Khan as an officer. He expanded and tweaked his name from MS Khan to read as Mohammed Sharif and omitted the suffix, Khan in his freshly constructed naval dossier.

Surely, MS Khan was smart and intelligent; he was quickly promoted to the rank of Rear Admiral. During the 1971 war, he commanded the Eastern Naval Command. Immediately after signing the ‘Instrument of Surrender’ he was taken as Prisoner of War (POW) by the Indians.

Since he was known to Admiral SM Nanda, (the Indian Naval Chief in 1971), Rear Adm Mohammed Sharif was shifted to POW camp at Jabalpur. Here the in-charge was his old communicator buddy, Rear Admiral Gautam Singh.

Admiral Nanda visited Admiral MS in Jail and also had the grace to gift the Pakistani admiral some fruit and flowers. On his return to Pakistan, Mohammed Sharif was promoted to Vice Admiral’s rank and in March 1975, was catapulted to be the chief of Pakistan navy as a four star Admiral.

In 2003, the admiral was once again in news in India. It was reported that General  Niazi surrendered pistol was stolen from the National Museum on Janpath. It was later discovered that the missing pistol actually belonged to Admiral Mohammad Sharif, that was handed it over to Rear Admiral N Krishnan at the time of the 1971 surrender.

The story of Royal Indian Naval Mutiny is interesting; many others in the strike committee went into lucrative careers after independence. The new evidence demands a fresh look at RIN mutiny beyond the nationalist and left perspectives.

*The author is currently writing a book on the actual history of the RIN mutiny based on archival material
Posted by AtulBeret at 2:15 AM