The first piece of advice urged the young cadets to remember that “An Army can have no politics. It is the paid servant of the people and is at the disposal of the Government of the day, whatever may be the political complexion of that Government.”

His second advice outlined the three guiding principles that place the honour of the country above every other concern of a military officer.

In early 1930s, Chetwode’s insistence on keeping the army politics-free was to dissuade nationalist youth from joining the newly Indianized army and challenging the validity of the empire. The Indian state that was neither based on ideology or theology opted for its army to remain moored to an apolitical and secular ethos and thus Chetwode continued to be relevant post-independence.

Today, the Chetwode’s code of military professionalism is flagrantly violated. The Indian military is no longer blasé about politics. Politics is no longer a taboo in army messes and naval wardrooms because it is openly discussed by serving officers on social media.

The social-media posts by many serving officers largely echo the aggressive-nationalist sentiments expressed by the right-wing politicians. Only on rare occasions one gets to hear a contrarian view from a serving officer.

Forget left-wing views, the officers who believe in Field Marshal Chetwode’s credo are also reticent. They feel constrained to bring a modicum of balance in the discourse.

Some social media comments make one wonder if the Supreme Commander of the armed forces is the Prime Minister and not the President. The fact is that boundaries that distinguish military personnel from civilians in context of their political participation are getting eroded.

Looking at social media trends and the brazen manner in which rabid right-wing propaganda is posted and forwarded by serving military officers, it is not far-fetched to imagine that the top military leadership in the country is fully aware of it. From time to time the military establishment has been issuing directions for armed forces personnel to refrain from commenting on social media. However, the fact that instructions are going unheeded clearly shows that there is lack of will on part of the service headquarters to impose discipline.

Take for example the Navy Foundation, a body of former naval officers. The Delhi chapter of the foundation is regularly involved in spreading communal agenda. The Hindu reported about the 20 October 2015 newsletter of the Navy Foundation that featured an article with negative references to the minority community.[1]

A few retired senior naval officers also informed the naval headquarters about this. In December last year the Naval Chief reiterated that “Every ship of the Indian Navy is a microcosm of India, where we have personnel from every single state, including every religion as well.”

The Indian Navy  neither indulges in invoking any religious text before casting off or launching its missiles, nor does it employ and religious gurus to help its sailors in need. In fact, the Indian Navy, prohibits the display of images of Gods or religious symbols in sailors’ mess decks or any other part of the ship.

One cannot deny the retired community their right to politics, but can the Naval Foundation that is directly linked to the Naval Headquarters web-portal be allowed to post communal and political propaganda material. Such partisan trends are indicative of the deep malaise that has gradually crept into the armed forces over the past few years.

There is a distinction between serving a constitutionally elected government (the BJP) and serving the ideology (the RSS) that the government believes in. The Right-Wing nationalist discourse that conflates religion with the state has set in motion a chain of confusion. where honoring the cow is seen as equivalent to serving the country. Armed forces are an important ingredient in the right-wing recipe of aggressive nationalism. In order to appease its ideological master, the ruling dispensation at the center wants the armed forces barricaded within the sacred walls of Hindutva. Just as the Turkish army is considered to be the “home of the Prophet,” the RSS perhaps prefers to confine the Indian army to a home of some Hindu God.

The use of armed forces by the right-wing for political purposes is a menace. The martyrs in J &K were brazenly politicized in the recent controversy in which nationalism of India’s premier university was questioned by some media houses using doctored videos. Last week, a Hindi news channel, IBN 7 interviewed Havildar Sudhir Kumar Yadav in uniform, where he spoke against the against JNU student leader Kanhaiya Kumar, taking absolutely similar position as propagated by the RSS.[2]

Such blatant use of a serving army man in political fight is unprecedented. The forces behind this sinister propaganda are unaware of the dangerous consequences of mixing armed forces and politics. In all probability the video could be doctored, because after a few hours of its broadcast it was removed from the website of the channel, however, IBN7 did carry a story on their website that mentioned about the interview. However, if the interviewee is service personnel then it has to be seen what action army headquarter takes against him for such indiscipline.

Ajai Shukla, India’s foremost defence journalist in his article titled “Armyism” published in Business Standard, gives us more examples where the government has involved the armed forces in religious functions like Yoga Day.[3]

The government is scaling up the military to a pedestal where questioning or criticizing the military becomes sacrilegious and paradoxically it is engaged in ridiculing its just demands for OROP and other allowances in the seventh pay commission. Adding insult to injury, the government approved deployment of army personnel and equipment for building pontoon bridges for a private function of Sri Sri Ravishankar, a religious guru. As if this was not enough, the government acted in a ham-handed manner and arrested a 75-year old veteran, an office bearer of the ex-servicemen organization struggling for just and legitimate pension rights.

The rightward politicization of the military is disturbing the civil-military equilibrium and militates against the tenets of a democratic state. The dangers inherent in these trends need to be debated by social scientists as well as military studies experts. These developments have the power to boost the army’s propensity to acquire political power or as Field Marshal Chetwode warned in his 1932 speech, “Once there is any suspicion that an Army, or any part of it is biased politically, from that moment the Army has lost the hill confidence of the nation who pays for it. It is no longer impartial, and that way lies chaos and civil war.”

The understanding of internationalism is must in every debate on Nationalism.

However, the Right Wing has been absolutely dishonest about its deep rooted international moorings.

The left's problem is that it has shied away from exposing the international linkages of the Right-Wing groups. The left must expose the comprador character of the Right-Wing elite. It must show how the right wing elite is a part of the global capitalist class and how it is engaged in pauperizing its nation to appease its Western master.

The BJP govt is against NGOs that come from abroad and work in India but they have ignored the fact that their NRI friends of RSS in America are not Indian citizens. They have their careers to protect and their loyalty is with the nation that they are citizens of.

And knowing the reach of CIA one is sure that many of the American Friends of RSS must we working for Uncle Sam to perform acts ranging from communal riots to influencing elections in India with their money. This is not new in 1968 questions were raised in parliament about use of PL80 funds by CIA operatives to interfere in Indian elections.

The Right-Wing because of its its very class-allegiances is inherently anti-national and this must reach to the people.

The Left's also needs to be cautious in its assessment of forces that shape the international discourse. Many a times these forces, largely residing in the West, are the hand-maiden of imperialist forces. Therefore, these forces representing "international good"  need to be thoroughly scrutinized.
Posted by AtulBeret at 10:20 AM No comments:

THE STORY OF OPPRESSION IN A DALIT NAME 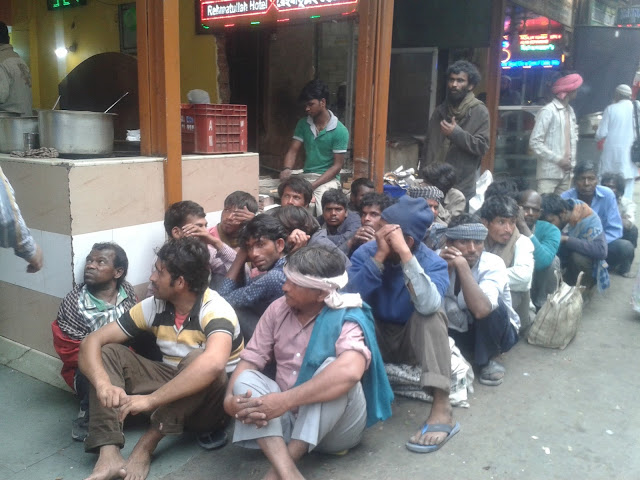 Some 20 years ago, I came face-to-face with this Dalit reality while serving on board an Indian naval destroyer. As officer of the day (OOD) I embarked on my 'rounds' of the ship at 9 PM sharp. The quartermaster at the gangway piped and announced the commencement of rounds on the ship's PA system. This was to alert all the 'off-working hour' duty personnel to be on their post to report cleanship and safety of their part of the ship.

Besides, inspecting the mess decks and galleys the OOD also inspects the bathrooms and toilets during the rounds. The job of cleaning the toilets is done by a special branch in the Navy known as "Topass''. To accord a modicum of dignity to sailors of the Topass branch, the navy calls them “sanitary hygienists”. The education eligibility or entry into this branch is VI standard.

During my rounds a young duty-Topass was standing outside the sailor's toilets to report. He saluted me, I reciprocated. But my eyes shifted to his faded name tally, which hardly revealed his name.
I asked him his name.
He replied, NAHAK.
I said, NAYAK form Orissa.
He said, no sir, my name is NAHAK and I am from Orissa.
I reconfirmed.

The moment he repeated Nahak, I remembered these lines from a poem by Faiz, "Sheeshe ka Messiah",
"Tum Nahak Tudke chun chun kar daaman mein Chipaee bethe hou..."
I told myself but NAHAK means USELESS. How could a person be named USELESS?

I finished the rounds, went back to the wardroom, lit a cigarette and thought to myself... in that one particular name there is so much history. It shouts out the story of centuries of Dalit oppression and exploitation in India.

Nahak’s name is his pain and his reality. It is much more than the pain Vijay (Amitabh Bachchan) felt in Dewaar when he understands the meaning of the words, “Mera Baap chor hai”, inscribed on his arm by the oppressing classes to remind him of his status and position in the  society.

Posted by AtulBeret at 8:50 PM No comments: