The Civil-Military relations in India

This essay was published in Purple Beret -  Jan 2010 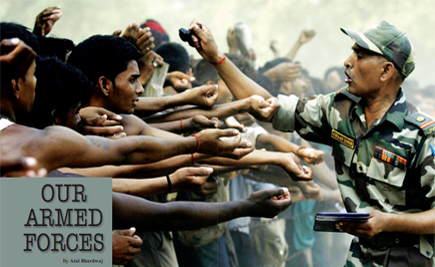 There are no mergers and acquisitions in the civil - military conundrum. Democratic norms prevent the military from acquiring the political space over which civilians have an exclusive right. And demands of the military profession discourage the men in uniform from completely merging into the civilian crowds.

Therefore a healthy distance between those who possess the “monopoly over the means of violence” and those who exercise hegemony over the political arena has to be maintained in the best interest of the people and the polity. Can this distance remain static? Does the altered socio-political environment and technological growth put additional pressures in reducing and in some cases perhaps, enhancing the hiatus? To understand the complexity of the armed forces relationship with the society at large one needs to draw a holistic picture of this relationship.

There are four planes on which civil-military relations work. Armed forces with (a) the people or nation (b) the government or the state (c) the civic society or civil rights groups and media (d) the corporate world. Unfortunately, in India most of the military and social science literature remains limited to viewing civil -military ties through the narrow prism of military hierarchy’s equation with the bureaucracy and political class. Such narrow analysis prevents both the nation as well as the military men from understanding the evolving dynamics that shape their relationship. Thus giving rise to undue tensions and misperceptions.

The military and the masses
Thousands of young Indians that throng the recruitment rallies across the country bear testimony to the health of military’s relationship with the masses. Many would say that rather than peoples’ love for the military service it is unemployment that drives the village folk to join the services. This argument cannot be discarded completely. However, there is more to people’s preference for military jobs than just joblessness. In almost every Indian village, military families are held in high esteem. Association with the armed forces is seen as a symbol of pride. More importantly, the service conditions and care that the services offer to the men who enroll strengthens the military - masses bond.

One more crucial factor that needs to be borne in mind by the forces and the government is that the Indian military operates purely for national causes. Therefore the support that they get for protecting the peoples’ rights is unflinching. In contrast, the Western countries face serious problems when it comes to getting recruits for their military, mainly because the society perceives their military engaging in avoidable wars in foreign lands. This was evident in the during the Vietnam War and more recently the protests in both US and against the Iraq war. It is the support that the Indian military gets from the people that helps the government to make almost zero efforts to sell wars like the 1971 and Kargil War to the public.

Although the military has never raised its voice against the government and the bureaucrats who run the show, the undercurrents of discontent are discernible.

The first time the imbalance came to fore was after the 1962 debacle. The political class came in for severe flak for interfering too much into military affairs. And the military too was asked to pull up its socks for not making the government appreciate the inadequacies in India’s military machine. In the 1971 war both the Indira Gandhi led government and the army led by Field Marshal Sam Mankeshaw saw to it that both the national objectives and military preparedness were dovetailed to achieve desired results.

So far as the crunch situations are concerned the relationship between the two has prevailed in accordance with the laid down norms. The problems have been largely felt during peace times. And these have been reflected in the statements and articles written by senior service officers either just prior to their retirement or post retirement. The only time a serving service chief, Admiral Vishnu Bhagwat tired to raise a pitch of protest - during the middle of his tenure-he was unceremoniously sacked in 1999 by the then BJP government. It was reported that the then army chief General V P Malik kept mum during the whole episode. The government managed the media fallout well and the country lost an upright and honest officer. The inter-service bonhomie hit an all time low. The final result was that the bureaucracy reasserted its supremacy in running the defence services as per their whims and fancies.

More than the indifference of the politicians towards the armed forces, it is the rather negative attitude of the bureaucracy towards the defence services that irks those who work in the headquarters and interact with the ministry of defence on a regular basis. The rivalry came into the open during the 6th Pay Commission recommendations when the bureaucrats made the government bring the services almost on their knees to get their rightful dues. There was a phase in 2009 when the ex-servicemen were on the streets indulging in mass protests. The rumblings of these protests were also felt among the serving middle level officers. Making-hay- while-the-sun-shines political outfits in the country were quick to grab the opportunity to woo the disenchanted servicemen. What the government forgot in the process was that listening only to civil servants could dent the apolitical character of the Indian military in the long run and thus create new problems for the democratic polity.

The events in 2009 have adequately proved that on military matters related to service conditions as well procurement of defence equipment, the government needs to incorporate the armed forces into the decision making process.

The military and the media
The civil society represented by the media and the middle classes is largely sympathetic to the sacrifices that the military makes in the course of their duty. However the problem arises when human rights groups begin to question the military’s role in troubled spots like and the North East. Although one is not defending excesses in the name of defence, it is necessary for NGOs to realize that the Indian army has neither acquired the special powers in these regions by holding the government to ransom nor have they lobbied to impose special ‘Acts’ in their favour. The government has granted these powers to them due the prevailing security situation in those areas.

Electronic media today is another Achilles’ heel in the civil-military matrix in the country. In a most recent case, the media covered the unproven land scam in the Eastern sector alleging direct involvement of top generals. What hurts is that the unsubstantiated news freely flowing into units directly impinges on the morale within the armed forces - severely denting the faith of the men and junior officers in the system; a system that trains them to prepare for the ultimate sacrifice for the nation. How the military needs to handle the all pervasive media is a challenge that requires deep introspection and perhaps an altogether new approach of confronting the 24x7 news networks through military information networks spread across the nation. The other issues highlighted in the media, like the gay rights movements are yet to affect the military ethos. But time is not far when these changes in societal values would begin to echo within the messes too.

Corporate warriors
The lure of lucre offered by corporates (until of course the economic downturn) is another disturbing trend that has challenged the intake of officer cadre into the forces fold causing acute shortage of offcers at the unit level. On the other hand when hiring ex-servicemen, the corporate world ignores the expertise they bring to the boardroom because of their strong sense of discipline and responsibility along with the varied experience in handling organizational and operational duties.

Unfortunately, India Incorporated is yet to realize that most of the management techniques have actually been tried and tested in various military laboratories of the West. Another fact that is so conveniently forgotten is that Indian armed forces have the tremendous experience of globalization because the nature of their job makes them interact with the outside world more often than not. And this is reflected well in their uniforms and marching traditions which are common across the globe.

The civil society has to comprehend the role that the military plays in society’s development. The Indian armed forces today are the best equipped not only to defend India’s national interest but are equally capable of handling disaster management, ranging from foods and droughts to searching for missing helicopters. The armed forces personnel after their retirement have contributed immensely to the growth of all sectors - aviation, golf, security, hospitality, corporate training and much more. So, all that money that the government spends on maintaining a standing armed force gives a long- term return and is ploughed back into society. The armed forces schools have produced the most outstanding students in all fields including the entertainment industry. Then why should the hiatus between the civil society and the armed forces grow? In fact, if the bureaucracy does not appreciate the role of the armed forces, the civil society must use all channels to educate the government machinery to integrate the armed forces fully into the national mainstream by including them in the national decision making process.
Posted by AtulBeret at 5:19 AM