Give Military Man the Entry, or he will Kick it Open... 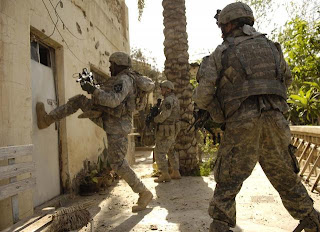 There are only two contenders for political power in any nation. The first is the political man backed by money and second is the military man aided by the gun. Since money is more powerful, the military normally accepts to play second fiddle to it. This acceptance of a subordinate role results more from expediency than magnanimity. While money has the strength to stand on its own feet, military often needs the crutches of the state to stand tall. However, the two normally stay together in a symbiotic relationship.

For example, in China,  men-in-uniform are seen rubbing shoulders with other party members in the Politburo. Similarly, in America, money power vesting with the military industrial complex has ensured that the US armed forces elite are active members of the club that rules the world and garners  global wealth. It is this dubious connection of the top military leadership with the top 1% of the wealthy population that is agitating the US veterans who have fought in distant lands. As one US war veteran says, “Don't stand with the global 1 percent. Don't stand with these generals that continuously abuse their own service members and then talk about building democracy and promoting freedom."

However, in the unique Indian civil-military set up (that has refused to change even after 60 years of independence), the military leadership continues to be debarred from entering the elite club that gives exclusive entry rights to politicians’, bureaucrats and businessmen. Having seen the enormity of dubious money transactions that happen in this shady club, the military man is feeling shortchanged for being kept out of its premises.

There is growing perception among many veterans and serving officers that the sanctity and security of the country that Chetwode had described as the utmost duty of a soldier has been destroyed by the tainted Politico-bureaucratic nexus aided and abetted by unscrupulous businessmen.

In the neo-liberal age, national causes look too profane and weak to be the raison d’être for the armed forces. Their association with business interests  is too obvious to be ignored. Over the past two decades, there has been considerable weakening of the state -military umbilical cord.

I recently read an interesting blog by an army officer that once again asked the age old question – “What do I die for”? The article begins with Anatole France’s quote that the ‘soldier dies for the industrialists’. The author of the article, Col VP Singh further says, “Soldiers, today, must learn that they no more fight nation's wars but the conflicts started by inept, inefficient and incompetent bureaucracy in league with self-centered, greedy and corrupt politicians.”

Unlike the pre-independence officer, the post-independence lot do not suffer from any guilt conscience of having served a colonial master. They have won victories for India in various wars and are not ready to buy the argument that confines the military to the periphery of power structures in the capital for the sake of democratic health of the nation.

The trends hint at the armed forces trying to swim hard to locate an anchor. This search can either lead them to become more ambitious for political power or ferociously hanker for a trans-national alliance as an independent entity – similar to what Pakistan and many other third world armies have done by getting into a cozy relationship with the Pentagon or letting their elite mortgage them to the empire.

We are almost back to 1950s, when the military leadership, like many good servants of the Queen, was skeptical about the ability of the home-grown leadership to govern India. The Indian military officers trained under British tutelage - had tasted - if not fully savoured - the glamour of power while working for the British flag. Post independence, the military elite thought that they would continue to be as important to democratic India as they were to the empire. However, the roles and missions of the newly independent India were completely at variance to the imperial aims.

Leaders like Field Marshal Carriappa and General Thimmaya did try to disturb the civil-military apple cart by asserting the military supremacy. However, the progressive elements within the political class ensured that independent India’s military unlearnt their imperial lineages and were confined to the fringes of the corridors of power. The military leadership reeling under the guilt of their erstwhile mercenary connections accepted to remain a passive spectator and concentrate on their professional development.

The generation of officers currently at the helm is witness to deterioration of political standards in the country. They have also seen the frontal assault on Indian democracy in 1975, when ‘emergency’ was declared. The question that comes to mind is, why is the post independence officer speaking up now - why did he remain a mute spectator to the growing criminalization, and communalization of Indian polity in the late 1980s and early 1990s?

The only plausible answer to these questions is – in 1990, after the demise of Soviet Union, a new hope was sold across the world and the global herd began moving in the direction of generating wealth by hook or crook. The Indian military elite (more at an individual rather than at an institutional level) too got busy keeping up with the Joneses in the “race to the bottom”.

However, as the gloss of capitalism started peeling off and the blatant loot of state assets started tumbling out from the closets of those who had been singing paeans of inherent virtues of neo-liberalism, the military officer could not believe that he has been fooled.

Let us not fool ourselves and the nation by thinking that military leadership is short on respect and once they get this rather vague commodity, everything will be smooth. Because one is yet to find a military leader who questions the basics of the neo-liberal set up that is splintering the national security – they have never even once raised their concern about privatization of military that is fast usurping their turf.

One is convinced that the battle for honour and respect that the military man is waging against the bureaucracy is just a decoy because much like the Englishman, the Indian military man too does not have any “false pretension to be loved; he wishes to be comfortable and to “make money”. The military man does not openly say it, but he also desires to be a part of the loot currently underway in the country.

The military elite is cocksure, it has a natural life membership of the club that ensures how money is to be made and distributed within the nation, it is for the other club members to realize that they have very little choice but to make room for the military man.
Posted by AtulBeret at 5:40 AM